The Manchester Christmas markets have just opened and - for the first weekend only - as a group of printmakers, with links to Prospect Studios, we have a stall in the centre of Manchester at Exchange Square. It's where the big wheel used to be, right opposite the Next store, so not too hard to find. 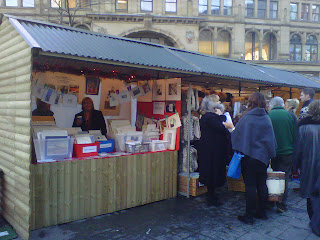 There's work from 10 or more local printmakers on show and for sale - original etchings, linocuts, aquatints... I had a great day yesterday on the stall in the afternoon with Jill Randall. We had a lot of interest and some sales - of prints and cards. It was a good chance to have a chat to people and get feedback. Fortunately it wasn't too cold - and it was close to the food and gluhwein stalls! Thanks to everyone who came along! It's continuing through until around 7pm tonight. Well done to Alan Birch for all the organising!
Posted by Carolyn Murphy at 09:23

Carolyn Murphy
I'm an artist and printmaker based in Manchester, UK - www.carolynmurphy.co.uk I aim to capture a strong sense of place in my work. I'm a member of the Hot Bed Press print workshop, in Salford and regularly attend Prospect Studios workshops in Rossendale.

Click on the fern image to go to the homepage of www.carolynmurphy.co.uk

Past Exhibitions and Events

20:20 Print Exchange 2014 - 2 of my prints are part of the touring exhibition of over 500 UK artists' original prints. Featured online.

2 works in the Open Contemporary art exhibition, Stockport Gallery: May 12 to June 24 2012

Didsbury Arts Festival 2011 from 24 September to 1 October - including Craft Cafe at the Northern Lawn Tennis Club on Sunday 25 Sept and 'Art over the Counter' with works displayed in the window of the Cheese Hamlet, Didsbury village, Manchester throughout the Festival - extended to 26 October 2011.